Following God’s call to be a multiplying church

Redeemer’s story has always been caught up in God’s big story of the Gospel. We have sought to be a church living out Jesus’ Great Commission to go and make disciples of all nations (Matt 28:18).
Central to this call has been our conviction that God has called us to be a multiplying church. Over the last few years we have had the joy of seeing new churches getting started but God has clearly spoken to us about now stepping into new multiplication. Our eldership team will play a key role in several aspects of this.

What does this mean for you?

This upcoming season of multiplication will impact all of us: whether you feel called to join a church-plant, or to stay where you are, or you don’t know what God is calling you to yet.

To help you find out more about the upcoming multiplication and what this means for you, we have various events and evenings where you can ask questions, process together, and pray.

June: You can join us each Wednesday in June at the Nieuwe Kerk to for a series of themed evenings about the upcoming multiplication.

July-August: The summer period will include fewer events to make space for holidays and a time of reflection/seeking God. For those interested in joining the Dutch church plant, there will be a number of prayer gatherings and fun hang outs planned. More info to come.

September: As we prepare for multiplication at the end of September we will have a focus on Gospel and mission, as well as 21 Days of Prayer and Fasting. The 25th of September will be the big launch: sending off the Dutch speaking church plant, sending out Tom and Tineke, laying hands on Joseph and Racheal for team leadership in The Hague and on Chris and Karin for the new role.

Join us Wednesdays from 20:00-21:30 in the Nieuwe Kerk for our multiplication Q&A evenings. 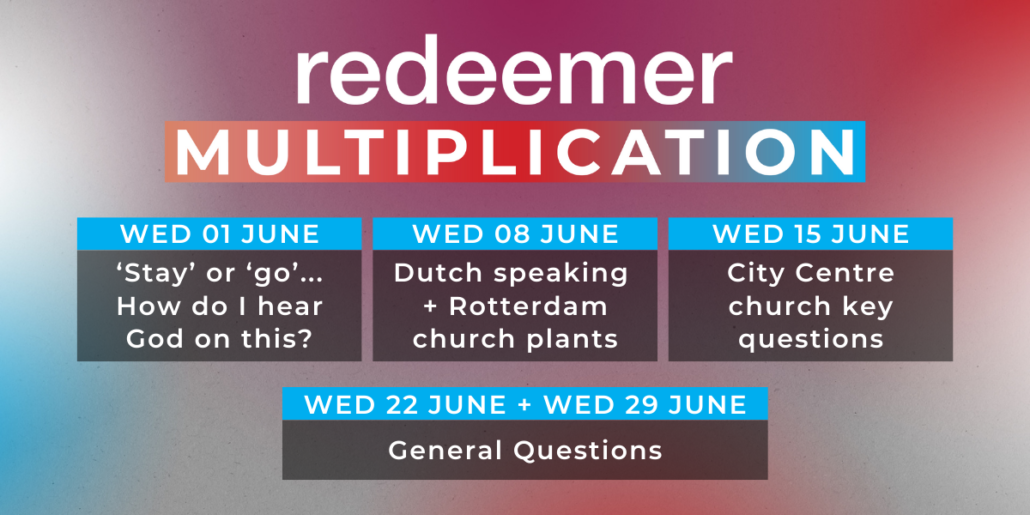 Why is multiplication and leadership transition happening now?

Multiplication has always been in Redeemer’s story

Redeemer is primarily in the story of God, the wonderful Gospel. So, the big story that Redeemer has always been in is about going into all the world and making disciples, baptising them in the name of the Father and of the Son and of the Holy Spirit, and teaching them to obey everything Jesus has commanded us (Matt 28:18-20). This sense of movement and ‘going’ with the Gospel has meant that we have always been a church anticipating that multiplication through church planting will happen because church planting is the most effective way of sustaining a spread of the Gospel.

God has been preparing us for this

Over the past 3-4 years God has been speaking to us about a change of season for the church and that it was time for us to be ‘tipping’ forward into new adventures. One significant prophetic picture at the start of this process was of the church as a roller coaster that was going up and up and had reached a tipping point. The interpretation was that God had been gracious to us in what has happened so far but that there was now a moment where we could either stop and try and hold onto what we have, or it was a time to tip forward with the roller coaster and go forward into the adventure that God has for us. As elders we felt completely united about tipping forward into all that God has called us to with him.

This process of embracing the new season that God has for us led us to going through the book of Exodus as a church, emphasising the hugely important lessons of transition with God, leaving behind the old and grabbing hold of the new in our lives, and in church.

The past 3 years have seen God speak to us about this new season involving more multiplication, specifically including church planting into The Hague and also specifically about reaching Dutch speakers in their own language. At the same time God was speaking to us about change as it related to buildings and about going for a city having a ‘Resource Base’ building. However, while God seemed to be stirring us with these things, he was also not opening any of the doors we were pushing. Finding the right leaders ready for church planting into The Hague did not seem to be working and pursuing other buildings was also not fruitful. And then the pandemic hit and so much seemed to be on pause.

But God was still at work in us, speaking to individuals about their next season and to us corporately about what kind of church he has called us to be as we multiply in his timing.

Towards the end of 2021, two significant things happened. Firstly, a fantastic new space opened up for us in The Hague centre. This new building has replaced the Voorburg space that we rented and we see as developing (at least in part) into the Resource Base building that we felt God spoke to us about. Secondly, the elders of the church had an evening with a prophetic group of people who had been asked to pray and seek God for us as couples, as well as pray for the church. This was a very significant evening where God spoke clearly to each couple regarding his calling for them, and God spoke to us together for the church in this season.

One very helpful prophetic picture that came on this evening was of many new and old books in a library “flying around” and what looked like chaos(!). However, the message that came was that this was God’s doing and he was moving around books (people) in Redeemer, bringing new people into place and dusting off some older books for new purposes. Another similar picture was of a chessboard where the pieces were being moved around (representing God repositioning people in the church). There were also other helpful prophetic words about a new season for us, and again about multiplication.

At the start of 2021, Bram shared with the elders that God had clearly spoken to him and Lisanne about leading a Dutch speaking church plant in The Hague. At the same time Chris shared with the elders that he felt God was leading him to begin to hand over team leadership to Joseph. More recently, Tom shared that he and Tineke feel that God has called them to join the team planting Redeemer Rotterdam.

The elders responded positively to all of the above and plans began to take shape around the timing, transition and process of these things happening. These things feel like the continuation of the story that God has always had us in. Multiplication is in our DNA.

How will the different churches work together?

Redeemer City Centre and the Dutch speaking church plant will both be autonomous churches within the New Ground Hub, New Ground Family and the wider Newfrontiers family of churches. However, because they are churches that are both in the same city, we anticipate close working together and sharing of resources where appropriate. This will be worked out in a close working relationship as it is helpful rather than being ‘required’.

How will all of this impact the roles of the current elders?

Chris: Chris will remain an elder within Redeemer City Centre. He will spend roughly 50% of his time carrying responsibilities as an elder (still preaching regularly, helping to raise leaders and carrying general eldership responsibilities). Most Sundays (roughly 75% of the time) he will be present in Redeemer City Centre. The other 50% of his time will be spent serving other churches and leaders, helping raise up new leaders and new churches to get started.

Joseph: Joseph will come into paid employment from 01 June 2022. Initially he will be employed for the role of Associate Pastor. He will fulfil this role until he takes on the role of Lead Elder from Chris on 25 Sept 2022 .

Bram: Bram will lead the new Dutch speaking church plant into The Hague. He will no longer remain an elder in Redeemer City Centre.

Pieter-Jan: Pieter-Jan will remain an elder within Redeemer City Centre with greater responsibility of Gospel impact into the city.

Tom: Tom and his family will be leaving Redeemer The Hague to join the Redeemer Rotterdam. This will mean that Tom will leave employment with Redeemer at the end of September 2022.

How will Redeemer’s legal and financial structures be impacted?

When/how will all this happen?

Wednesday 22 June: Faith and adventure as we step forward + prayer

Wednesday 29 June: Faith and adventure as we step forward + prayer

July / Aug – Holiday time and time of reflection and seeking God about implications for you.

Sunday 04 Sept – Gospel and mission: Week 1 + start of 21 Days of Prayer and Fasting

Sunday 25 Sept – Big party in church (sending off the Dutch speaking church plant, sending out Tom and Tineke, laying hands on Joseph and Racheal for team leadership in The Hague and on Chris and Karin for the new role.